We were helping our school's FRC team clean out their parts closet, which hadn't been cleaned in 10-ish years. Under the layers and layers of FRC junk, we found an Apple II-operated Patterson/Paxton CNC Milling Set. These were meant to run off of a long-since-gone Apple II in a classroom setting. But, it had long been auctioned off, leaving the set useless. But, Iron Reign, as a collective of hoarders, decided to bring these machines over to the house to refurbish.

The first idea we looked at was emulating the Apple II with an Arduino, as seen here. However, this implementation didn't have the response rate needed for an accurate CNC machine, so we scrapped it. Then, we found this post. The problem that people mainly encounter is that, for some strange reason, Paxton\Patterson used a proprietary parallel port pinout, and deviating from that pinout (read: using a standard parallel cord) would fry the optidriver board in the machine. So, we bought a ethernet-to-parallel port jumper box (UC300eth).

We then sliced a parallel cable in half, and rewired the wires to the pins, treating the left column of that of the port numbers on the board and the right as the pin numbers of the cables. 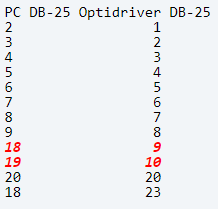 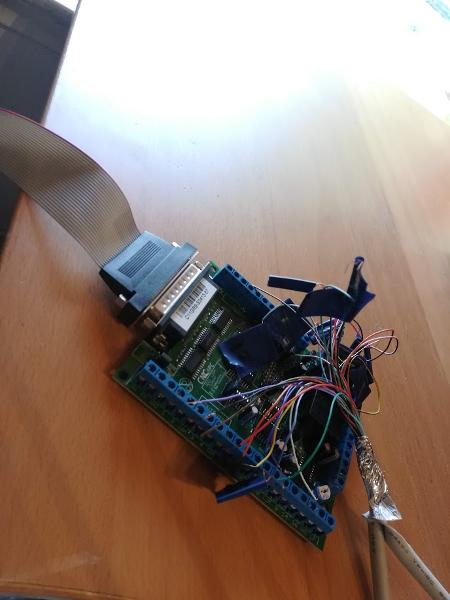 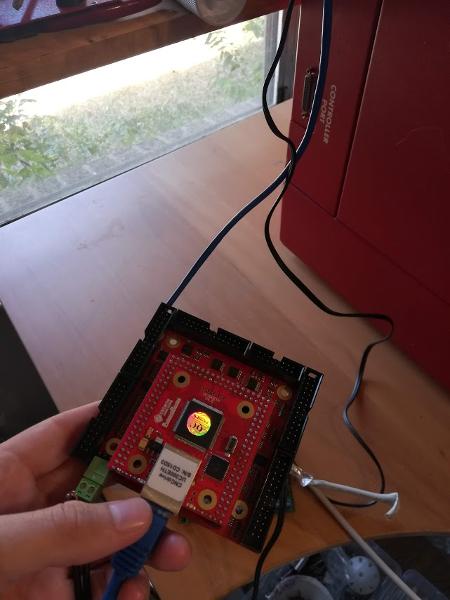 We then made a power supply for the UC300eth. We attempted to use a 10V DC power supply, and use a voltage splitter. Unfortunately, the power spiked, and probably fried the UC300.

We need to buy a new UC300 board and hook it up to a laptop with Mach3 to test the power. 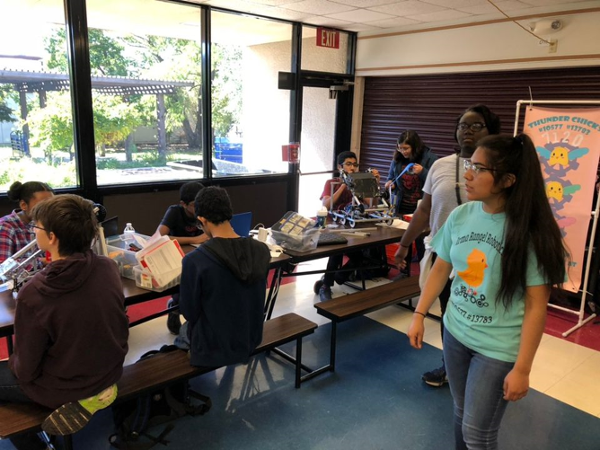 Today, Iron Reign competed in the DISD scrimmage at Hedrick Middle School. This was the first scrimmage of the year, so experienced teams and rookie teams alike struggled to get a working robot on the field. We go to this scrimmage every year, and it helps us gage just how much needs to be done to have a qualifier-ready robot. This year, that is a lot. We actually had two robots relatively pieced together, a main chassis and a backup, but we didn't account for many different problems that rendered them inoperable. In the case of the backup robot, the linear slide fell apart easily and was threaded so that it could only extend, and not retract. In the case of the actual robot, most of our problems stemmed from the intake system. Since we built it so recently, we were never able to write any code until in the final few days of preparation. We weren't able to debug the code and it has caused many complications in our robot. Our drive train also had many issues which we have been trying to fix and fine tune.

Due to these many issues, we did not compete for most of our matches. We spent a lot of time working on our bots and talking to other teams about their progress and plans for the season, as well as see all of the interesting ideas they have put together in fruition in a game setting. In the match we did compete in, we did very badly due to driver error and mechanical errors in the drive train.


Task: Compete and observe important things needed to continue the build of circle robot and for future competitions. 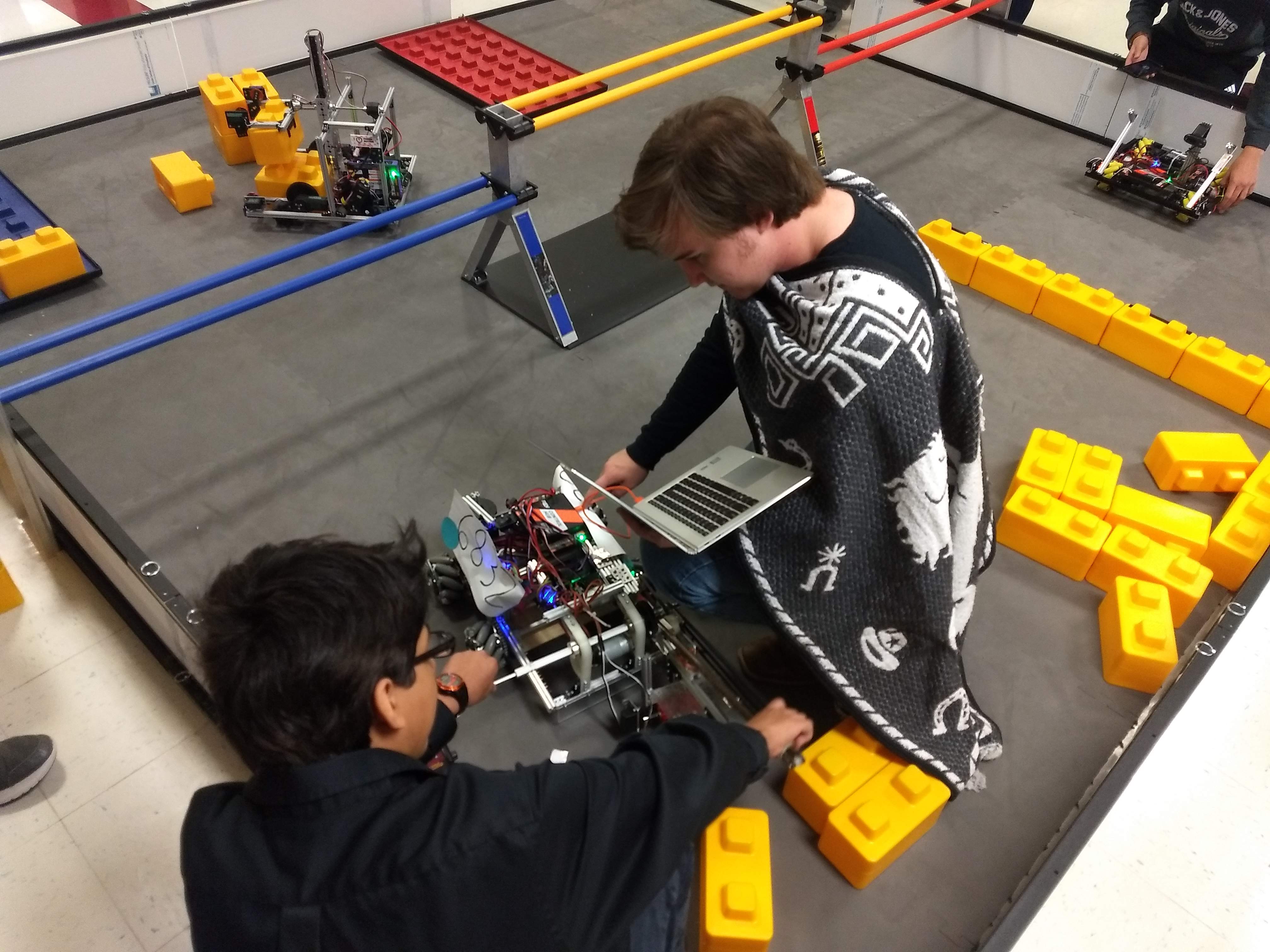 This Saturday Iron Reign attended the scrimmage at Hedrick Middle School. This scrimmage was for many rookies, the first exposure to a competition environment and the basic structures of team communication. Both the rookies and the returning team members had an opportunity to communicate with different teams and to get exposed to different ideas and their respective thought processes. Iron Reign used this scrimmage as a way to look at what robot designs were most effective and a lot of key aspects of the game we may have glossed over earlier in the season.

Many things determined a robot's effectiveness, for example, we noticed that the robots in the competition that did the best were the ones that had the most direct routes and were able to manipulate the stones efficiently and effectively. We also noticed that positioning and placing the stones on the towers was very difficult for us and the teams without programs that automatically line up the stacks. This strengthens our need for circle robot which when finished should be able to stack with much more precision than the average robot. The other thing that the circle robot would help with is lining up the arm to pick up stones which also proved to be very challenging for teams with grippers that need to grab a block in a certain orientation like us.

There were a lot of unexpected penalties that can change the tides of a game, for example, the human player can not place an object in the quarry if there is already an object in it. Doing this awards 15 points to the opposing team. Another thing we learned is that to receive the points from delivering a stone the robot must fully cross over the tape under the bridge. A lot of people with push-bots lost points because their robots didn't fully cross the tape. Overall, penalties and losing points were easy ways for a team to lose a match quickly and if we don't watch what we do we can potentially lose an entire competition because of them.

Our next steps are to keep working on the circle robot because it should be able to better complete the challenge. We also see like never before that even though this robot is not done, we still have Frankendroid and we still need to perpetually do driving practice with it because ultimately, the best teams will have the most driving practice. However, the biggest next step we are taking is that we are coming to practice more often because our first qualifier is so close but we are so far from a good robot. There is still a lot of work to do.